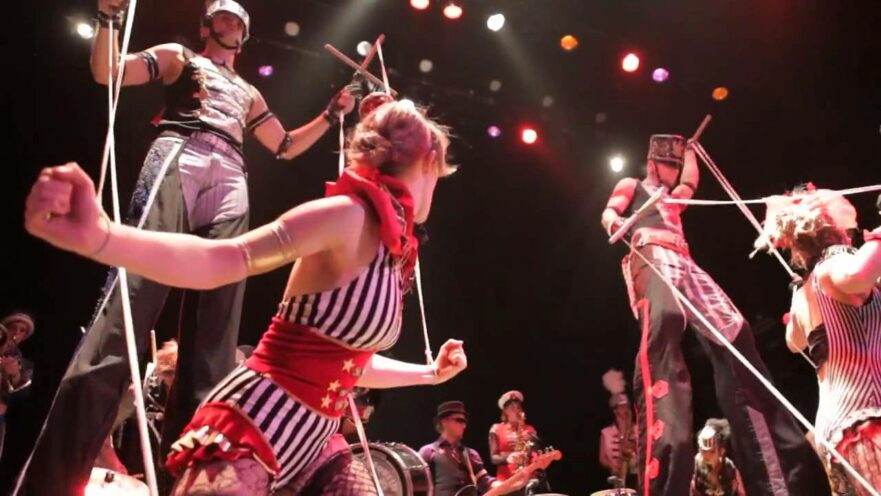 If you’re looking for some Sunday night plans in Los Angeles, look no further. MarchFourth is one of the most fun and unique shows you’ll ever see and they’ll be playing at the Bootleg Theater on Sunday, October 20th.

For those that are unfamiliar with the group, MarchFourth is a kaleidoscope of musical and visual energy that inspires unabashed dancing, and an atmosphere of celebration. Dressed in redesigned marching-band-themed costumes, they bring electric bass, 4-piece percussion corps, a 7-part brass section, dancers, acrobatics, stilt-walkers and a very diverse musical repertoire. They are far from a “marching band” in any traditional sense, but they have been known to swagger down Main Street playing tunes before taking the stage. MarchFourth travels in a crew of about 20, all on one tour bus, bringing their unique brand of party with them all over the world. Their show will take you on a journey from the swamps of Louisiana to the gypsy camps of eastern Europe to the African jungle by way of Brazil, echoing the deepest grooves of American funk, rock, and jazz then boiling it all together in cinematic fashion, real showmanship and dazzling dancing. This genre-busting, in-your-face experience is not to be missed!

Grab your tickets for their Sunday show before it’s too late. And if you’re not in Los Angeles, you can see the rest of their tour schedule here.