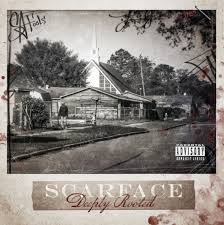 51
SHARES
FacebookTwitter
Scarface is resurrected after his seven year hiatus from spitting bars with Deeply Rooted, an album that gets as deep as its name suggests. The Houston rapper announced the release via his own record label Friday on his Facebook. Scarface is known for his lyricism and expressive content- this album will definitely satisfy his fans after his long absence. Hip Hop and R&B industry favorites like John Legend, Rick Ross and Nas join Scarface on his 15 track album.
Scarface brings all of his prowess to the forefront, rapping over meticulously put together beats with his typical brutal honesty . He candidly explores love, suicide, police brutality, poverty and racism. In a time where people of color are speaking out against racial injustice, Scarface’s commentary is extremely important. The music video for “Steer”, where Scarface has a fatal encounter with law enforcement, epitomizes the rapper’s sentiments about police brutality. For anyone who has forgotten who Scarface is or what he’s all about, this album will definitely remind them of the originality and passion that has made him a rap legend.
Stream Deeply Rooted below to see why Scarface is still one of the best rappers of our time.
1. “Intro”
2. “Rooted” (featuring Papa Reu)
3. “The Hot Seat”
4. “Dope Man Pushin’” (featuring Papa Reu)
5. “Fuck You Too” (featuring Z-Ro)
6. “Steer” (featuring Rush Davis)
7. “Anything”
8. “Do What I Do” (featuring Nas, Rick Ross & Z-Ro)
9. “God” (featuring John Legend)
10. “Keep It Movie’” (featuring Avant)
11. “You” (featuring CeeLo Green)
12. “All Bad”
13. “Voices”
14. “No Problem”
15. “Outro”