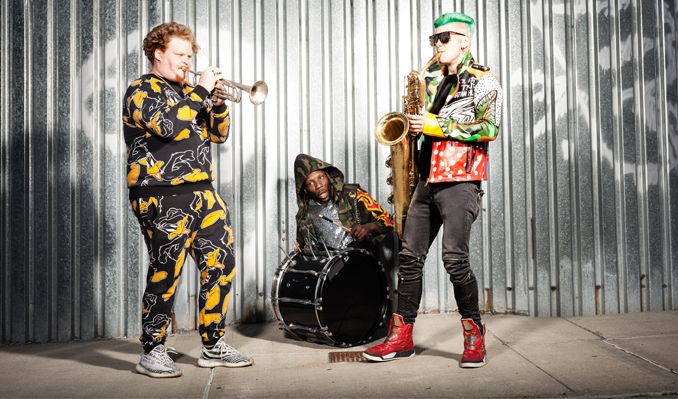 At FestivalsForLife we’ve been Too Many Zooz fans for a while now. It all started in 2016 when we heard their hit song, Warrior for the first time. After that we knew we had to check them out. However, it wasn’t until a 2AM set at Lightning In A Bottle that we got our first live taste of the group. We were hooked. They had a ridiculously unique sound, and boy, they were fun to watch on stage.

We were lucky enough to see them at the Lodge Room in Highland Park almost a year ago, but it wasn’t until their latest Los Angeles appearance that we really got a sense of just how far the band has come.

On Wednesday, October 9th we headed to the Teragram Ballroom, one of our favorite LA venues, to see Too Many Zooz return to the City of Angels. For those that are not familiar with the group, it consists of three members: saxophonist Leo P., trumpeter Matt Doe, and drummer King of Sludge. They coined their genre “BrassHouse” which combines EDM, house, techno, and glitch, paired to the indigenous punch of Cuban, Afro-Cuban, Caribbean, and Brazilian Carnival rhythms, and more. It’s definitely brass heavy with the sax and trumpet leading the charge and almost impossible to not start dancing to the beat.

While the group has always had an incredible stage presence, this was one of the most notable improvements we noticed. From the very first minute they stepped on stage, they had your full attention. From Leo’s nonstop, goofy dance moves to King of Sludge coming out in a mask, the group is a master of drawing attention from their beautifully odd antics that make the show so fun and unique.

The show was packed with energy and each member had their moments to shine. With all the movement and dancing they are doing on stage, we found ourselves constantly wondering how they’re able to keep such high energy throughout the duration of the show. The group had the full audience moving and grooving as they did their thing up there.

Another impressive accomplishment was the crowd size. When we saw them last year they were playing in a smaller venue. Not only was Teragram bigger, but they also managed to sell it out…. ON A WEDNESDAY! It’s definitely safe to say that the group has consistently been growing their fan base.

Along with a killer performance, we also enjoyed the group taking time to speak with the audience. We especially liked when King of Sludge took the mic and let the audience know how much he appreciate them and how he takes his job seriously to help foster more creativity in this world. We also loved hearing about their story. Did you know they started playing music seven years ago in the subways of NYC? Look how far they have come since then.

After putting on a terrific show, the group encored with their hit song, Warrior. It was the perfect way to end the night. For those of you that haven’t seen Too Many Zooz before, do yourself a favor and get on it. While you may enjoy their music, it’s a completely different experience seeing them live. Check out their tour schedule here and make sure to grab a ticket if they’re coming your way.