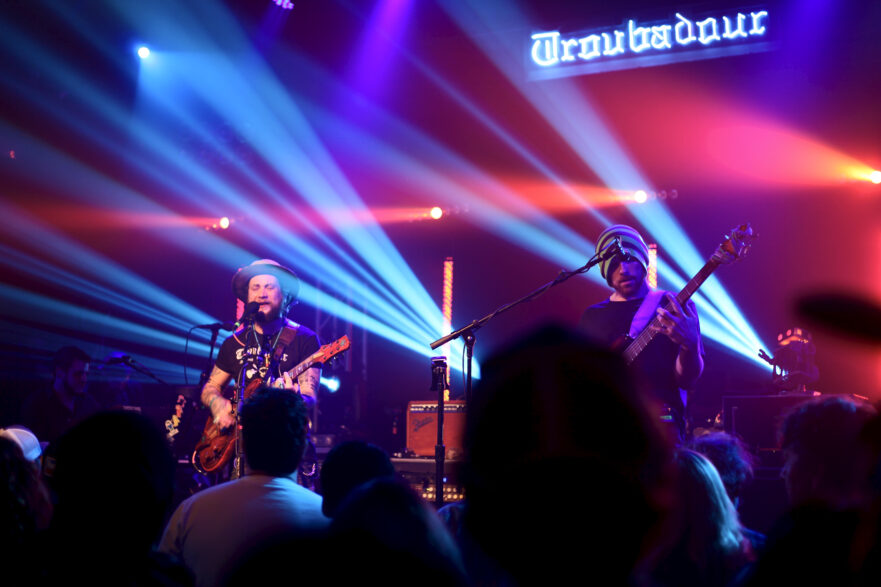 Twiddle played a sold-out show at the legendary Troubadour on Friday March 6th, 2020. The group from Vermont brought their enticing mix of rock, jazz, reggae, funk, and bluegrass to Southern California, and with help from The Higgs, put on a show as groovy as it is out of this world. Twiddle’s songs speak of love and loss, and of characters who, whether real or imaginary, are beloved like family to those in the audience. Amid these fantastical stories, lies awe-inspiring instrumentation and some of the funkiest beats you could ever hope for.

The four-piece group consisting of Mihali Savoulidis (guitar/vocals), Ryan Dempsey (keyboardist), Brook Jordan (percussion/vocals), and Zdenek Gubb, started off the show with the fun rhythm of “Every Soul”. This immediately had the crowd dancing before digressing seamlessly into a funky bass solo that fans affectionately call a “Gubb Dump” (appropriately named after the bassist). The unrecorded and infectious favorite, “Brown Chicken Brown Cow” came next before the band returned to “Every Soul”, completing the “jam sandwich”. One of the more notable songs of the show was “Be There”, whose heartfelt story and chord progression invoke feelings in even the most hardened of souls.

The raging beats and time signature switchbacks of “Blunderbuss”, preceded the more up tempo “White Light”. The journey of which, took the audience on a jam session that can only be described as equal parts spicy and spacey. The last song before set break included guest vocalist, Mary Corso, on the stage. Twiddle & Corso’s soulful rendition of Angel from Montgomery was captivating and a perfect button to an impeccable first set.

The second set kicked off with another funky “jam sandwich” made up of “Zazus Flight”, “Doinkinbonk”, and the dynamic “Just Gravy”. It was clear that the space up near the stage was reserved for those ready to rage, and coincidentally, I was one of them. In addition to booty-shaking rhythms, Twiddle is known for a jam phenomenon called “peaking”, where just when you think the tempo and intensity will back off at the end of a stanza, it keeps going and going. Needless to say, the peaking was a-plenty this show, and “Beethoven and Greene”, the tune about finding the elixir of life on a mountain, seemed fitting. The ensemble ended the set with a personal favorite, “Lost in the Cold”. I dare say there wasn’t a dry eye in the audience or a body standing still.  With the crowd wanting more, Mary Corso once again came out on stage and joined the band, this time to perform Leonard Cohen’s “Hallelujah”.To those who have yet to see a Twiddle show, it is important to note that as much as the songs themselves are important, even more so are the funky breakdowns and the friendly atmosphere created by both the band and the fans. Throughout the show, there was a couple dipping and spinning along to the music, a man who was FaceTiming some friends (in an unobstructed manner) so they could sing along to their favorite song, and a woman who was handing out clothespins with positive messages to other fans that were dancing. There were captivating lasers, a dancing robot acting as a stage mascot, and even a keytar solo. If you’re lucky enough to have Twiddle come to town, buy your ticket and start stretching now – you’re surely in for an unforgettable night of dancing and grooving.