So instead I’m shifting this article into more of a POV or thought piece. To me, writing about music has always been my form of creative expression, a time I can say exactly what I want or think with no judgement.

It it with this lens that I feel it is only right to state my piece- and do a deep dive on the value of coming together through music, experiences and frankly, music festivals, as trivial as them may seem, for our well-being and psyche. Leading up the tragedy and travesty that happened with a nation divided and the fear that crept upon us all on that Tuesday, I spent some time with close friends in Steamboat Springs, including one who is getting his PHD in psychology.

While we spoke freely about our love for the world of music, he told me that interestingly enough, the act of going to festivals is tribal. He went on to explain that “ancient hominids would host music festivals during different seasons as a means to bind tribes together to create peace through ecstatic dance and the consumption of etheogens.”

If you didn’t know what etheogens are, I didn’t either. Wikipedia says that they’re a chemical substance, typically of plant origin, that is ingested to produce a non-ordinary state of consciousness for religious or spiritual purposes…. Ahh I get it. They’re party favors. So the next time your parents give you shit for going to a music festival, tell them that the act of going to festivals is primal. ( ;

If that paragraph just went over your head, i.e. for the TLDR version and why you should care: Ancient people used music as a means to get together to break down barriers between them and their “tribes.” They would seek this out to escape the stress of everyday life to share in a common experience with strangers.  And in order to allow for those barriers to be resolved, they’d take substances to allow that connection to happen freely. They would seek out pure person to person engagement through peace via music— song and dance as a way of bonding with others who might or might not be similar to them.

And just as we think so much has changed, maybe it hasn’t at all. Maybe this is our time to affect that change, through music.

When we look back at times of extreme political uprise and unrest, economically and politically, we can see correlations between that, and of course, the expression of those events exclaimed and expressed through the arts. If we were to look at Woodstock, in 1969, and Newport Folk Festival, a few years earlier in 1965, we can see that both promoted the birth of free love and freedom of expressions and beliefs, aka the “hippy” ideology. This hippy culture championed a rejection of dominant cultural tropes like capitalism and patriarchy, and music was the catalyst which allowed for the emergence of this culture.

What we so often forget though, is that these were in their own rights, protests in their purest forms, as expressed by music. Think about Bob Dylan’s song, “The times they are a changin” They were in response to a failed and unrepresented political system, the refusal of participating in the Vietnam War, and a disenchanted youth. The net net: the government was corrupt and wasn’t listening to the youth, so the youth DID something about it.

I’m not sure I know what I’m saying yet, but I do know that the Revolution won’t be televised. And it sure as hell won’t be on Snapchat or Instagram. (As much as you all know, I love them.) But it will be through groups of people who want to affect that change. A little less conversation a little more action. By people who want to steer the world into a more positive place. If at first only through what they have control over, be it music, it has to start somewhere. It’s like that Tracy Chapman song, “Don’t you know, talkin’ about a revolution, sounds like a whisper.”

Well, here we are historically, friends. We’re in a point of time where we, our generation or millenials, generation Y (or generation WHY NOT) aren’t heard. It reminds me of this piece of artwork I saw at Bonnaroo a few years ago, pasted below. 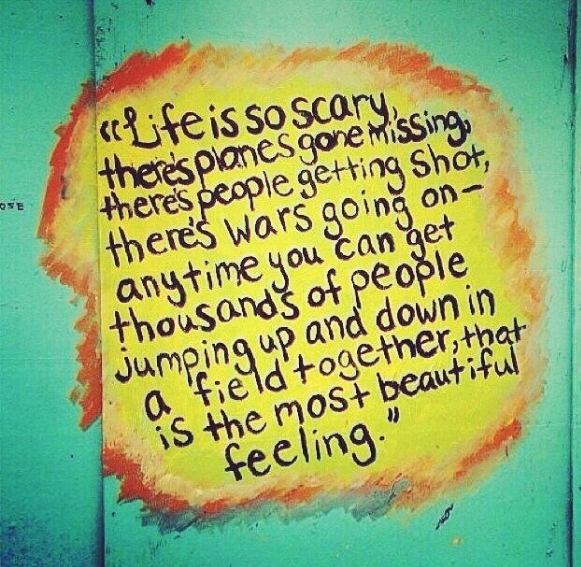 So what can we do? We can continue to seek out that connection. The breaking down of barriers which allows for us to truly connect to each other and our tribes, regardless of where we’re from.

When I took a deeper look at the implications of Woodstock, a few things became crystal clear to me. The first is that it can be argued, that Woodstock was that pivotal moment of “counterculture” that has become trademarked as the beginning or start of festival culture. The second, and interesting point, is that it uncovered one human truth and ideal that I think still holds true at ANY festival- from Hulaween to Glastonbury today:

Everything changes, joy is ephemeral, and we should always live in the moment.

We escape the real world to seek out our own utopias because we understand that bigger may not always be better, and that friends made and experiences shared are as important as any lineup, or sometimes even greater.

So, we must carry on and remind the older generations that we, the millenials, will continue to break down those barriers, learn about the tribes of others, and connect on a higher lever through music and dance. That’s what we’re about. We create our own worlds and it is in the core, how we define ourselves (when we chose to do so.) Not by our day jobs, but what we spend our money and energy doing- experiences and connections through ecstatic song and dance.

And for that, I hope music festivals and artistic expression that comes from them never, ever dies.